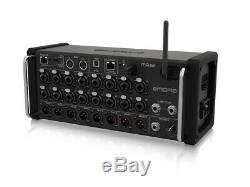 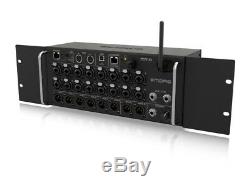 The small-but-powerful MIDAS MR18 rack-mountable mixer is engineered with technology used in the now legendary M32 Digital Mixing Console, which completely redefined what is possible from a digital mixer. It will change the way you record and play live music. In recent years, the recording and performance audio world has undergone a major paradigm shift, requiring musicians and performers alike to take advantage of emerging technologies that offer ease of use as well as flexibility.

Ideally suited for both live and studio applications thanks to 16 award-winning MIDAS PRO mic preamps, it also includes an integrated WiFi® module for wireless control, MIDI I/O, and a USB connector for storing files or the recording and playback of uncompressed stereo WAV files. Free iOS, Android, and PC apps let you move about the venue or the tracking room while manipulating all the parameters of your mix, plus the performers have the freedom to dial-in a shared monitor mix.

The combination of advanced engineering and careful design lets the MR12 deliver professional-grade performance and impressive affordability. The installed firmware also works with the Mackie Control protocol, letting you easily apply comprehensive remote editing and parameter adjustments using any compatible MIDI device. MR18 is equipped with a convenient USB connector, making it easy to store files or record and playback uncompressed stereo WAV files of your mix. Dial-in the perfect monitor mix with effects and zero-latency performance using one of the Aux buses, while recording up to 12 source signals then send the keyboard player's MIDI notes to your DAW for recording and editing.

And as if all that weren't enough, it incorporates the very same FX engines as the M32. Its onboard virtual FX Rack gives access to 4 true-stereo (8 mono), multi-effects processors that include delay, chorus, and dynamics. Plus, the MR18 can run production-quality, true-stereo reverbs simultaneously with 31-band EQ on the main and aux busesall without the need for any additional hardware. Custom-designed, and physically modeled after some of the most iconic and sought-after processors, all effects run inside the low-latency environment of the M32 mix engine, delivering flawless performance, flexible routing, and the end of cable faults. IPad/Android tablet controlled 18-input digital mixer for studio and live application.

MIDI In/Out allows controlling the mixer via MIDI equipment or for use as a USB MIDI interface. Auto-ranging universal switch-mode power supply. Designed and engineered in the U. M AIR EDIT PC/Mac/Linux Software screen capture. The item "Midas MR18 Digital Mixer 18 Input with16 MIDAS PRO Preamps Rackmount Demo" is in sale since Monday, May 7, 2018. This item is in the category "Musical Instruments & Gear\Pro Audio Equipment\Live & Studio Mixers". The seller is "campfield" and is located in Wausau, Wisconsin. This item can be shipped to United States.