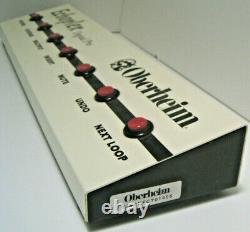 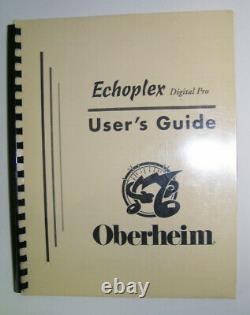 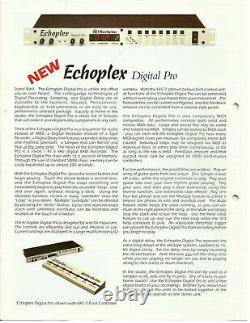 Vintage, 90's Oberheim Echoplex Digital Pro Rackmount Looper with Foot Controller Pedal - Excellent working condition. The Echoplex Digital Pro is a digital delay designed for the performing artist! Although conceived in the early nineties, it's a lot like the new Repeater Loop Recorders of today. Because of the Echoplex's extended and high quality sampling time for its digital delay effect, the Echoplex can be used to record, sample, and play loops all in realtime! The Echoplex features 16-bit digital 44.1kHz recording/sampling to RAM.

It Has Been upgraded to up to 200 seconds of memory/recording time. Play anything into it, loops, guitar, keyboards..

As soon as you stop recording, the sampled material begins looping... And you can now jam along with it! Overdub additional loops and build arrangements, all on the fly!!!

The number of overdubs and length of loops is limited only by the amount of memory. Mistakes or undesirable loops can easily be undone. The Echoplex can store up to 9 separate loop/arrangements. The Cool EFC-7 Foot controller (Included) can also be used so you can punch in and out of loops without having to use your hands... So you can keep playing. The Echoplex is also fully MIDI capable. All controls send/receive MIDI data and even the Loops can be saved and loaded via MIDI! Sampler - 16-bit / 44.1kHz.

The seller is "muz*k-etc" and is located in Carpinteria, California. This item can be shipped to United States.