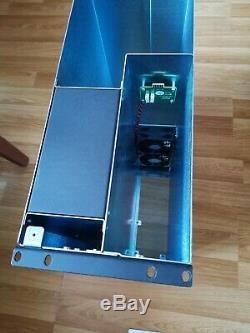 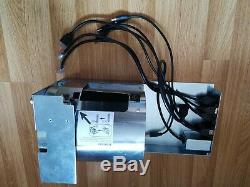 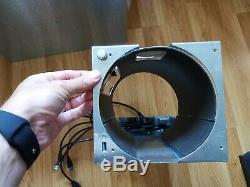 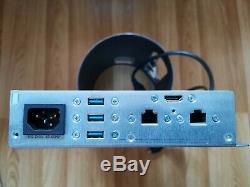 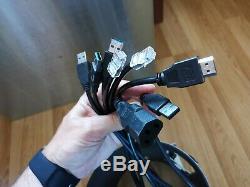 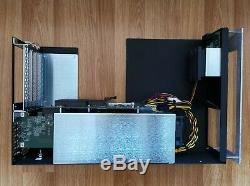 Also includes a 3 slot PCIe card expansion module which allows you to install up to three PCI Express expansion cards (not graphics cards) There is an additional bay that can be used to mount hard drives too but you'll need the additional drive bay module. Does include rack mount rear support rails.

The new Mac Pro is an object of desire, but a lustrous finish hides its true beauty withinmassive power. If youre a pro user in the video or audio industries, the Mac Pro offers the power you need, but lacks the built-in expandability you count on. In order to achieve this engineering feat, Apple. Designers stripped away components and space to a minimum, taking out PCIe slots and drive bays, and packed the remaining components into a small cylinder. Its compact size makes the new Mac Pro more transportable and rackable, but prevents onboard installation of PCIe expansion cards.

In addition, the computer still requires an enclosure to make it road- or rack-ready and provide convenient cable management. Sonnets xMac Pro Server PCIe 2.0 expansion system/4U rackmount enclosure addresses these issues and increases a Mac Pros potential in a big way. With amazing expansion capabilities, an easy to maintain modular design, and support for a wide range of popular mobile racks, carts and portable rack cases, xMac Pro Server is the perfect solution for expanding the power of your Mac Pro. Panel-mount cables (HDMI, two Gigabit Ethernet, three USB 3.0, one 3.5 mm audio [out or in], and power) connect the ports on the back of each Mac Pro to ports on the back each Computer Mounting Module for convenient external connection. New Faceplate & Thumbscrew Design.

Because of the active electronics contained in each end of a Thunderbolt cable, panel-mount connectors for Thunderbolt cables do not exist; Thunderbolt cables must be connected directly to the computer. Sonnet has updated the xMac Pro Server to make that task, and accessing PCIe cards, easier. Screws on the back of the enclosure have been replaced with captive thumbscrews, and the faceplate has been split in two (with each faceplate remaining attached to its module), enabling you to secure, release, and slide out each module without the need of tools.

Energy Efficient Variable-speed fans automatically adjust to the unique needs of each configuration, and the auto power on/off feature ensures there is no energy wasted with cards powered on when the Mac Pro is sleeping or off. Supports Thunderbolt Expansion Enables daisy chain connection of additional Thunderbolt technology devices when other Mac Pro Thunderbolt ports are in use. Every Thunderbolt-Compatible PCIe Card Supported Works with every Thunderbolt-compatible PCIe card, regardless of length or height.

Thunderbolt provides fast external connections to high-speed peripherals and high-resolution displays, all through one port. Combining the power of PCI Express (PCIe) technology and DisplayPort connectivity, Thunderbolt provides a gateway for your Mac to a world of external expansion systems, storage, video capture solutions and 4K displays. Through one connector, Thunderbolt 2 provides two channels of 20Gbps of throughput in both directions.

That's more than enough bandwidth to daisy chain up to six high-speed peripherals, including a 4K display, without the need for external power or hubs. Thunderbolt 2 incorporates DisplayPort 1.2 protocol which allows video streaming to a single 4K video monitor or dual QHD monitors.

Thunderbolt 2 is backwards compatible with earlier Thunderbolt devices, connectors, and cables at 10Gbps speeds. The Mac Pro includes six high-bandwidth 20Gbps Thunderbolt 2 ports to compensate for its lack of internal expansion. The original 10Gbps Thunderbolt interface on older computers provided breakthrough bandwidth for external expansion, more than sufficient to support the maximum performance of most Thunderbolt-compatible PCIe cards. However, some high-bandwidth cards such as the RED ROCKET, 16Gb Fibre Channel, multi-port 10 Gigabit Ethernet, and other bandwidth-hungry adapters require more than 10Gbps.

Because of its unique design, ThunderLok does not attach to the connector but remains on the cable so it wont get lost when not in use. Get Full Thunderbolt Performance, At a Distance. Whether noisy PCIe card fans make it impractical to use the xMac Pro Server in a noise-sensitive environment, or because securing it in another room is required, you may find it necessary to put some space between the xMac Pro and the workspace. Optical Thunderbolt cables, available in lengths up to 60 meters, enable you to locate your equipment where you need and connect the pieces without loss of functionality. Connect Up to Three PCIe Cards to Your New Mac Pro.

The latest Mac Pro's compact size makes it more transportable and rack space efficient than the older tower, but it doesn't accommodate onboard PCIe cards or storage expansion. Sonnets xMac Pro Server supports three full-length PCIe cards through its PCIe Card Expansion Module. It integrates a universal 300W. Even with all that power, xMac Pro Server is enviro-friendly; it automatically powers the PCIe expansion system on or off whenever the connected computer powers on or wakes, or powers off or sleeps, respectively.

The xMac Pro Server supports three full-length PCIe cards, or one double-width, full-length card plus one single-width card, enabling it to support every Thunderbolt-compatible card available. PCIe 1.1, PCIe 2.0, and PCIe 3.0 cards are supported.

Do you have a card in mind but aren't sure it's compatible with Thunderbolt? We've worked closely with PCIe card manufacturers to provide a list of compatible PCIe cards on our PCIe Card Thunderbolt Compatibility Chart.

The chart provides an up-to-date list of cards that have been tested to be recognized over a Thunderbolt connection and compatible with Thunderbolt technology requirements. If youre a RED ROCKET or RED ROCKET-X user, you already know that the card normally takes up two PCIe slotsone for the card itself and another for the BNC connector bracket (for HD-SDI output). Sonnet designed xMac Pro Server to accommodate the card/bracket pair in a single slot. The xMac Pro Server includes mounting holes designed specifically for the installation of two BNC connectors, enabling you to install the RED ROCKET card in one slot and its BNC connectors in the Echo chassis mounting holes, leaving the two remaining slots open.

The extra bandwidth afforded by the Thunderbolt 2 interface significantly increases the ROCKETs throughput, too. Designed for BNC Connector Cables xMac Pro Server's back panel has two mounting holes for BNC connectors, allowing the use of a RED ROCKET card without the need for the BNC connector bracket that would normally occupy a valuable PCIe slot. Avid Qualified Media Composer Pro Tools.

The xMac Pro Server is Avid qualified. See the AVID website for details on Pro Tools and Media Composer compatibility.

Four USB 3.0 port extensions (one front-mounted, and three rear-mounted). One 3.5 mm audio (in or out) extension.