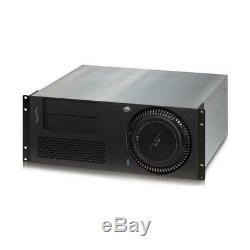 Sonnet xMac Pro PCIe 2.0 Expansion Server with 4U Rackmount for Mac Pro, 2x Thunderbolt, 2x Gigabit Ethernet, 4x USB 3, HDMI Ports. The Sonnet xMac Pro Server Thunderbolt PCIe 2.0 Expansion 4U System has become the object of desire, but a lustrous finish hides its true beauty the massive power within. If you're a pro user in the video or audio industries, the Mac Pro offers the power you need, but lacks the built-in expandability you count on. In order to achieve this engineering feat, Apple designers stripped away components and space to a minimum, taking out PCIe slots and drive bays and packed the remaining components into a small cylinder. Its compact size makes the new Mac Pro more transportable and rackable, but prevents onboard installation of PCIe expansion cards.

It integrates a universal 300W power supply and includes a 75W PCIe power connector for cards that require supplementary power, such as the Avid Pro Tools/HDX or the new RED ROCKET-x. Even with all that power, xMac Pro Server is enviro-friendly; it automatically powers the PCIe expansion system on or off whenever the connected computer powers on or wakes or powers off or sleeps, respectively. Smart Design All Around The xMac Pro Server has numerous thoughtful design touches. Its front panel mounted power switch turns the computer on and off without the need for you to reach around back. The front panel USB 3.0 port connects to the Mac Pro, enabling you to connect a keyboard, mouse or thumb drive to the computer without having to access its ports from the back.

Other Mac Pro interface ports are extended to the back of the chassis and mounted on the rear panel for convenient interfacing of the remaining connections: Gigabit Ethernet, HDMI and USB 3.0 cables, as well as the power cord. Holes for cable ties enable you to secure cables inside, keeping them tidy while avoiding accidental disconnects. An included Thunderbolt cable connects your one of the Mac Pro's Thunderbolt 2 port to one of xMac Pro Server's Thunderbolt ports, linking the PCIe slots to the computer. Like the Mac Pro, xMac Pro Server's additional Thunderbolt port supports daisy chaining Thunderbolt peripherals such as additional PCIe expansion (like Sonnet's Echo Express III-R rack mount chassis), pro video breakout boxes, video capture and playback devices, audio I/O devices and more.

The xMac Pro Server includes adjustable and removable rack mount extension rails that allow the enclosure to be installed securely in a variety of racks from 16" to 26" deep. Built for Speed The Mac Pro includes six high-bandwidth Thunderbolt 2 ports to compensate for its lack of internal expansion. The original 10Gbps Thunderbolt on older computers interface provided breakthrough bandwidth for external expansion, more than sufficient to support the maximum performance of most PCIe cards. However, some high-bandwidth cards such as the RED ROCKET, 16Gb Fiber Channel, multi-port 10 Gigabit Ethernet and other bandwidth-hungry adapters require more than 10Gbps.

Thunderbolt 2 technology removes this barrier by providing more bandwidth for demanding applications. The xMac Pro Server's 20Gbps Thunderbolt 2 interface takes full advantage of this increased bandwidth to ensure optimum performance from installed cards connected to the Mac Pro. If you need to connect a peripheral equipped with 10Gbps Thunderbolt, there's no problem xMac Pro Server is fully compatible with earlier generation Thunderbolt devices as well. RED ROCKET Supporter If you're a RED ROCKET or RED ROCKET-x user, you already know that the card normally takes up two PCIe slots-one for the card itself and another for the BNC connector bracket (for HD-SDI output). Sonnet designed xMac Pro Server to accommodate the card/bracket pair in a single slot.

The xMac Pro Server includes mounting holes designed specifically for the installation of two BNC connectors, enabling you to install the RED ROCKET card in one slot and its BNC connectors in the Echo chassis' mounting holes, leaving the two remaining slots open. The extra bandwidth afforded by the Thunderbolt 2 interface significantly increases the ROCKET's throughput, too. Securely Enclose Your New Mac Pro and PCIe Cards Constructed of heavy-duty steel, xMac Pro Server's outer enclosure provides secure mounting and protection for the computer and PCIe cards installed inside. Hidden behind a handsome front panel, both the computer and PCIe card expansion system reside in separate modules to simplify setup and maintenance, allowing you to work with the computer or cards individually. Constructed a protective cocoon for the computer out of steel and covered it with soft touch padding to hold the Mac Pro firmly in place while protecting its mirror finish.

There is leftover space in the enclosure, perfect for mounting additional equipment such as HDDs and SSDs, a tape drive, optical drive or even a Qio MR pro media reader. Cool, Quiet Operator The new Mac Pro's cylindrical core is topped with a single large fan that quietly and efficiently cools the computer, drawing in cool air through the bottom and expelling warm air through the top. Mounted on its side inside xMac Pro server, the computer's airflow path remains unchanged and unobstructed-full, independent airflow through the computer is maintained according to Apple's guidelines.

The xMac Pro Server was designed to be remarkably quiet so that it can be comfortably used in noise-sensitive environments. The PCIe card expansion system is cooled separately with dual, ultra-quiet, temperature-controlled fans. Its fans vent warm air through custom Venturi openings with low form-drag grills, resulting in reduced air velocity, turbulence and, consequently, fan noise. The fans are variable-speed and the computer-modeled airflow management ensures that even hot-running cards and the chassis' components remain reliably cool without the need to install an extra PCIe blower card that would prevent the use of one of the three slots. Every Thunderbolt-Compatible Card Supported The xMac Pro Server supports three full-length PCIe cards or one double-width, full-length card plus one single-width card, enabling it to support every Thunderbolt-compatible card available. PCIe 1.1, PCIe 2.0 and PCIe 3.0 cards are supported. Thunderbolt Cable Lock Sonnet includes a lock that secures the Thunderbolt cable connectors in place when plugged into xMac Pro Server. It is easy to install and prevents accidental cable disconnections. Two Thunderbolt (one open, one used) Two RJ-45 Gigabit Ethernet port extensions Four USB 3.0 port extensions (one front mount and three rear mount) One HDMI port extension.

For over 35 years we have been serving professionals as well as amateurs in the photographic, video, digital imaging and telescope fields. We offer the best combination of quality services, vast selection, knowledgeable staff, and competitive pricing. Adorama Camera is your #1 source for the best and newest products in the photographic industry, and the largest inventory of items such as Digital Cameras, Digital Camera Accessories, Memory Cards, 35mm Cameras, Medium Format Cameras, Lenses, Video Cameras, TV's, MP3 Players, Binoculars, Telescopes, Scanners, Inkjet, Dye-Sub & Laser Printers, Office Fax machines, Shredders, Projectors, Inkjet Paper, Photographic Accessories, Filters, Batteries, Cases, Tripods, Flashes, Lighting & Studio Equipment, Film, Darkroom Products and Audio Video Equipment. In an effort to comply with our Authorized Dealer contracts with the manufacturers and to best control our inventory levels we reserve the right to limit quantities or cancel orders to Resellers and Exporters.

Please note: Inventory is not reserved until the item is paid for. These charges must be borne by the recipient. Adorama has no control over these charges and cannot predict what they might be.

If the item does not have the option, please don't ask. No guarantees for other times.

Approved Change Requests may not be updated on eBays portal, please check the emails. Memory cards and any other Blister Pack items are not returnable once opened. Printers are not returnable once the Toner Cartridges have been installed or released. The item "Sonnet xMac Pro PCIe 2.0 Expansion Server with 4U Rackmount for Mac Pro #XMAC-PS" is in sale since Friday, January 12, 2018. This item is in the category "Computers/Tablets & Networking\Computer Components & Parts\Interface/Add-On Cards\Port Expansion Cards".

The seller is "adoramacamera" and is located in Elizabeth, New Jersey. This item can be shipped to United States, Canada.